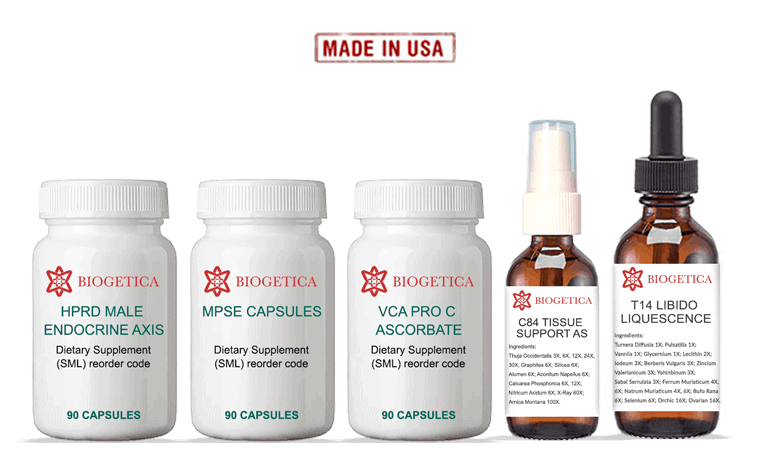 The Optimal Kit with C84 Tissue support AS Formula is a US made combination of advanced nutraceuticals, resonance homeopathic, and modern Bio-energetic therapies traditionally used to support the structure and functions of the male endocrine and reproductive systems.Read More

The US made kit contains the following natural remedies:

HPRD Male Endocrine Axis Formula is believed to restore balance within the entire male endocrine axis, which starts at the hypothalamus and moves down the pituitary to thyroid, prostate and finally the testes. It is traditionally believed to replenish energy by stimulating tissues to function optimally. It also removes symptoms such as malaise, fatigue and erectile dysfunction, which are all related to endocrine disturbances.

Addyzoa Capsules are a unique Ayurvedic remedy of herbs which are traditionally believed to increase spermatogenesis and reduce abnormalities associated with spermatozoa. They are believed to improve the quality and the quantity of seminal fluid and also regulate the secretion of testosterone by the testes, thereby stimulating the libido.

Cruciferate Tablets contain an oligo-element that is traditionally believed to fortify the testes and increase the life span of spermatozoa. According to the ancient texts, the mustard base is believed to potentiate its action and has the propensity to increase animal heat within the organism.

C84 Anti-Scar formula has remedies which are traditionally believed to promote re-sorption of fibrous scarred tissue, which could be a cause of infertility by blocking the tubes or ducts, such as the vas deferens, vasa efferentia, seminal ducts and prostatic ducts. It can help resolve adhesions or fibrous proliferations within the interstitial tissues of the testes, thereby restoring normal functions as far as possible.

A detailed description of all the ingredients is as follows:

Extracts derived from the following:

Selenium 200 mcg in a base of mustard.