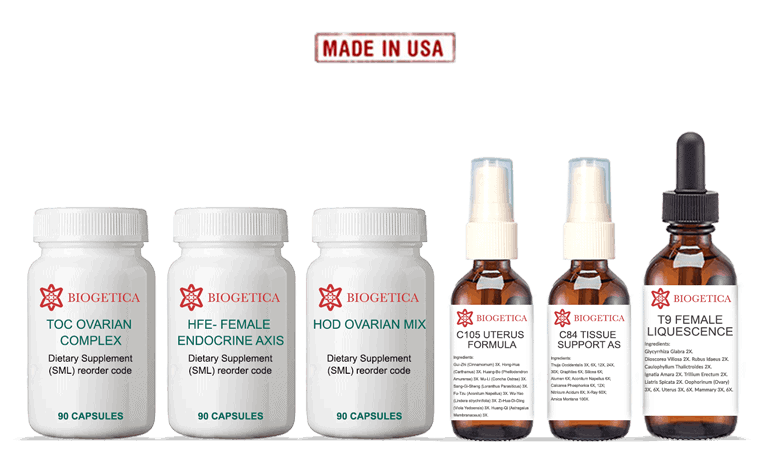 This optimal kit is a US made combination of Advanced Nutraceuticals, Resonance Homeopathic and modern Bio-energetic therapies. It is believed to help women with hormonal imbalances.Read More

It consists of the following natural remedies:

TOC Ovarian Complex is a formulation of vitamins, minerals, botanicals and other natural ingredients in combination with pure, lyophilized tissue concentrates. It is a unique amalgamation of ingredients traditionally believed to support the Endocrine system.

C105 Uterus Formula is a unique formula for any degenerative condition of the uterus which makes it non-receptive for implantation of the embryo, or too weak for it to sustain the fetus for a long time. It is traditionally believed to restore the normal consistency of the uterine walls, especially the endometrium and myometrium. It is also believed to act as a uterine tonic that strengthens the uterus, its surrounding ligaments and muscles, thereby preventing prolapse.

T9 Female Liquescence (T9 Female Fertilease Formula) is traditionally believed to provide Sarcode support. Sarcodes provide bio-energetic information on healthy ovarian and uterine tissues. Sarcodes, according to the classic Homeopathic principle of ‘Like Cures Like’, are believed to support the normal functions of the uterus and ovaries, when concerned with ovulation and menstrual cycles.

HFE Female Endocrine Axis is essential in restoring balance within the entire female endocrine axis which starts at the hypothalamus, moves down the pituitary to the thyroid, mammary glands, ovaries, and finally, to the uterus. It is traditionally believed to replenish energy by vitalizing the tissues at every level and stimulating them to function optimally. It also removes symptoms such as dysmenorrhea, genital acidity and fatigue, which are related to endocrine disturbances.

C84 Anti-Scar Formula contains remedies that are traditionally believed to promote re-sorption of fibrous scarred tissue, which could be a cause of infertility by blocking the patency of the tubes. It can help resolve adhesions or fibrous proliferations within the interstitial tissues.

A detailed description of all the ingredients is as follows: