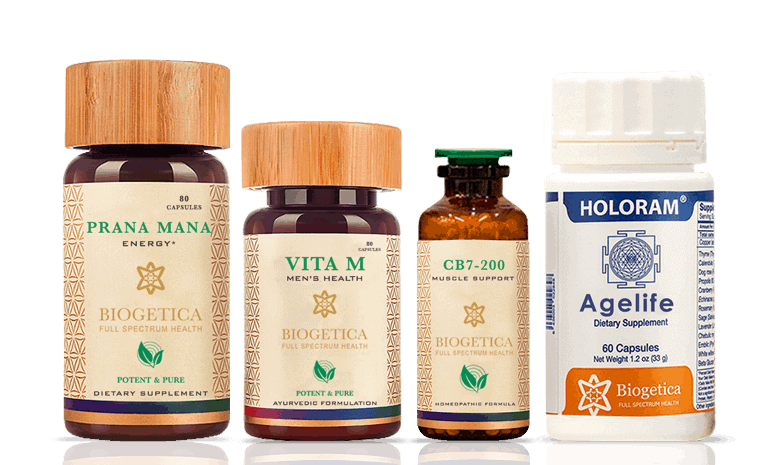 The Biogetica Deliverance kit with Fortyfitt Rejuvenative Formula is a basic combination of the Ayurvedic herbs, nutraceuticals, and homeopathic products traditionally believed to rejuvenate and improve the health of the cells of the body.Read More

This kit consists of the following 3 natural therapies:

A combination of Vibrational Homeopathic therapies, MIX 7 CB 7 200 is traditionally believed to support the body after a chronic illness.

Fortyfitt Tablets is a comprehensive Ayurvedic formula traditionally believed to reduce sensitivity to stress, boost energy levels and create a sense of well-being. It is believed to assist the smooth functioning of muscles, bones and marrow.

PranaMana stimulates the production and distribution of healthy, biological energy. It is aimed at preventing and correcting energy imbalances that affect the quantity, quality and/or distribution of energy in the body. Disturbances in the Energy spectrum is the first layer of resistance to any type of therapy, and is directly correlated to a dysfunction in the production of energy at the mitochondrial level.

BELLIS PERENNIS – traditionally believed to act on muscular fibres of blood vessels; venous congestion; abdominal muscles. It is believed to work especially on the muscles and blood vessels of the uterus.

CALC FLUOR – traditionally believed to put elasticity back into muscles and tissues wherever there is a relaxed condition in the system.

FUCUS – potential general tonic; it is a seaweed which contains iodine; traditionally believed to work on muscles, blood and blood vessels.

PranaMana is a bio regulator that is traditionally believed to fight asthenia, and weakness induced by physical or psychological stress, often associated with chronic fatigue syndrome. It is believed to prevent the accumulation of ammonium and promote their elimination, by activation of the Uric acid cycle. It provides the micronutrients necessary for Krebbs cycle, thus facilitating the production of cellular energy. It is also involved in the transfer of energy from mitochondria to the cytoplasm. The result is an overall increase in energy reserves, essential for a healthy lifestyle.

The mechanism of action of PranaMana is traditionally believed to allow a synergistic action to induce the increase and regulation of energy through:

The synergistic activation produced by PranaMana is the result of a combination of carefully selected amino acids, enzymes and minerals critical for production of energy in the cells and in complex organic systems such as the small intestine, the liver, striated muscle and the brain.

Take 1 or 2 capsules a day in the morning, before breakfast or as advised by your physician.