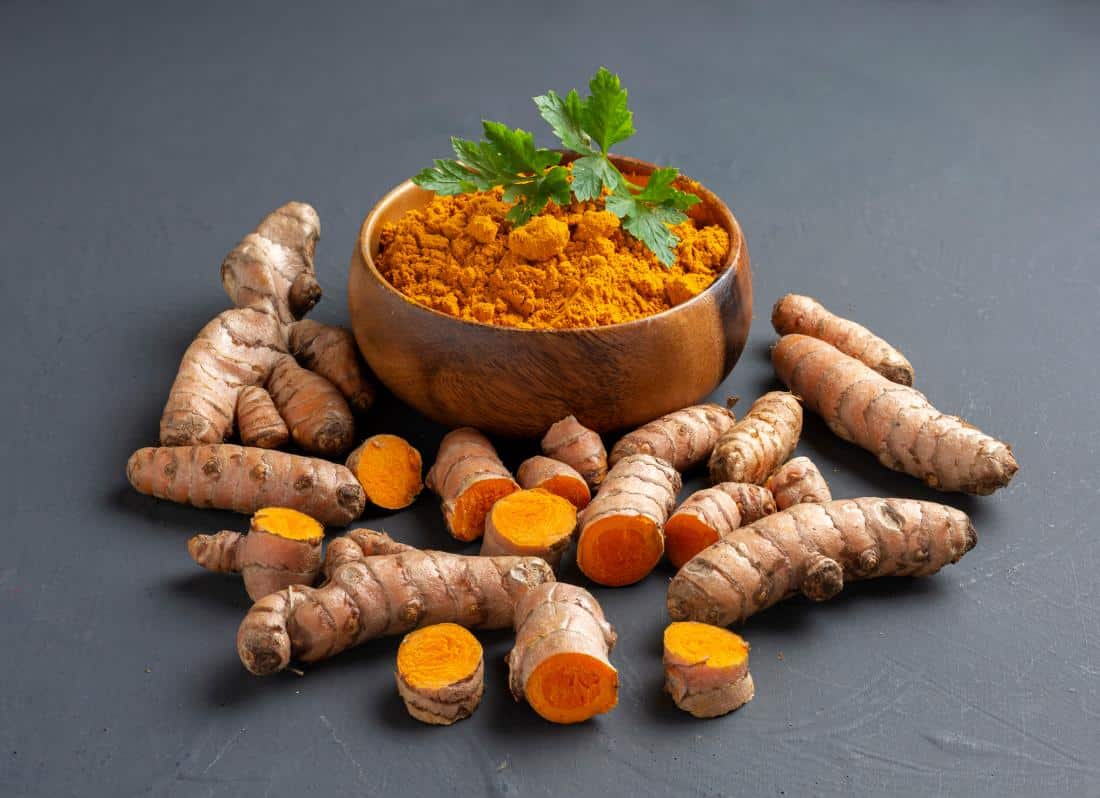 Turmeric is a perennial herb with tufted leaves. It is one of the most important spices that are used in Indian homes to give yellow colour to the curry. The plant reaches up to a height of 1 m. It is highly branched and found in cylindrical rhizomes. The leaves are arranged in two rows alternately.

What Are Turmeric/ Curcumin’s Benefits?

Turmeric is one of the most important ingredients used for making food.

In Ayurveda, turmeric has been used traditionally for many different ailments. It is mainly used for stomach disorders, boosting up immunity, liver ailments, and skin problems, and for cleansing wounds. It supports the normal functioning of the digestive and respiratory systems.

Curcumin Acts As An Anti-inflammatory Compound

Curcumin has anti-inflammatory properties and it helps your body to fight against foreign substances, and plays an important role in repairing the damage. It works by blocking NF-kB, a molecule that reaches into the nuclei of your body cells and aggravates the genes related to inflammation. Curcumin is a bioactive compound that helps to fight inflammation at the molecular level.

Turmeric Increases The Antioxidant Capacity Of Your body

Oxidative damage may occur which is the main reason for aging and other health issues. Turmeric has antioxidant property and it helps to protect your body against free radicals. Free radicals are harmful substances that react with important organic substances in your body. Curcumin also helps to boost the activity of your body’s antioxidant enzymes.

Brain-derived neurotrophic factor (BDNF) is a type of growth hormone that performs different functions in your brain. Deficiency of this hormone can lead to different brain disorders such as Alzheimer’s disease, depression, etc. Curcumin helps to increase brain levels of BDNF. It may also help in increasing memory and concentration.

Curcumin helps to improve the function of the heart. It improves the functioning of endothelium, the lining of blood vessels. Curcumin also reduces inflammation and oxidation that also plays a major role in lowering the risk of heart disease.

Studies show that curcumin is a useful herb that lowers the risk of preventing the uncontrolled growth of body cells. Studies suggest that it can also help by reducing the growth of new cells and spread to the other body parts.

Curcumin Is Useful For Arthritis Patients

Curcumin has anti-inflammatory properties and is useful for arthritis patients. It helps in reducing the signs of inflammation of joints such as swelling, redness, and pain. It provides support to the joints and helps in the normal functioning of the muscular-skeletal system.

Curcumin helps in delaying age-related diseases due to its antioxidant properties. It helps in reducing free radicals in the body and boosts up energy.

Curcumin also acts as a blood purifier. It purifies the blood and rejuvenates your skin. It brings a natural glow to your skin and prevents anti-aging signs.

Turmeric is considered an auspicious and holy substance in India and it is widely used in many ceremonies in Hindu culture and traditions. It is a popular substance used in wedding and religious ceremonies.

What Is The Difference Between Turmeric And Curcumin?

Curcumin is a naturally occurring chemical compound and it is mainly derived from turmeric. Turmeric is a root of the plant which is known as Curcuma longa. Curcumin belongs to a family of compounds known as curcuminoids. It was first identified in the year 1815. Since then, many studies are being done to learn more about this chemical compound.

A turmeric root may contain up to 2-5% curcumin. Therefore, taking unstandardized powdered turmeric root may not provide the necessary amount of turmeric. Curcumin is not well absorbed in the gastrointestinal tract but turmeric is good when used as a spice. A curcumin extract is a good choice.

How To Take It?

Turmeric should be taken with fats to obtain its full health benefits. When taken with healthy fats such as coconut oil, olive oil, or ghee, the curcumin in turmeric is quickly absorbed into the bloodstream.

Another way of using turmeric to get its full benefits is to take it with black pepper. You can also add a pinch of pepper to the turmeric milk to reap its full benefits. Curcumin alone cannot be used properly by the body. Black pepper contains an active ingredient known as piperine which helps in easy absorption of curcumin by your body.

Skin support: Turmeric is traditionally believed to support your skin. It gives you natural flawless skin. [3]

Biogetica synergistically blends plants for ideal assimilation and transport in the body. Hence as per the tenets of Ayurveda, we create synergist blends while ensuring that each ingredient has a precise amount of active molecules. For more information on the Biogetica products, you may reach at www.biogetica.com.